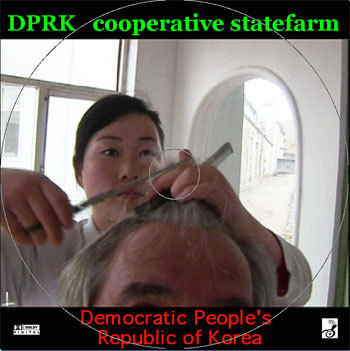 Wonsan area on the East Coast of North Korea
After several unsuccessful attempts to get a haircut in Pyongyang, I unexpectedly got one at a Model-Cooperative state farm in the Wonsan area on the East Coast of North Korea. My guide Tong Hui was elated when she got the go-ahead! from the woman in charge at the Cooperative state farm and even made some photos herself. After her many "Not possible" she finally  surprised me with a hair cut offer in a special most unlikely place! Yes, I had not expected that! For the locals it cost 5 cent, for me it was five EURO, probably a month's salary for a farmworker.
Login|Guestbook|Shop|Email|News|Links|Home
GPLv2 ywesee 2019