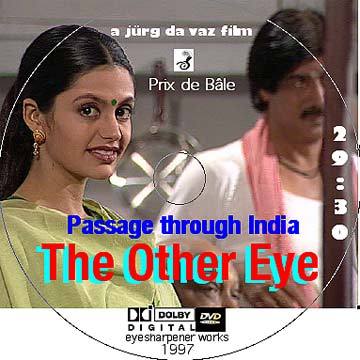 ...which unforgettable epics, songs and stories are here created! Filmed on site in Bollywood, Mumbai, India.

In cooperation with B. R. Studio at the movie city Bollywood in Mumbai, India. creative documentary

Da Vaz in Mumbai 1997, shooting his first film THE OTHER EYE at
Philomenas House. Da Vaz pursues archeology in the sense that he
reconstructs places in his memory by drawing without any intention
(Marie-Theres Stauffer). Life moves in a subtle corkscrew pattern with a
kind of axis of orientation running through space (Jürg Da Vaz).

The works of Da Vaz, as mentioned many times in previous texts, are
not representations of appearance, but of inner structural phenomena, of
an inner reality. They are representations of what takes place on the
stage of life. India is the world's largest stage of sensual experience.
Its vision of colour and gorgeous splendour, the complexity of its
multi-faceted human individuality, the inconceivable wealth of diversity
in the makeup of its people forming a colossal entity, all this
diversity as well as the intensity of its fragrances in everything: all
these impressions set in motion an overwhelming emotional experience.
The garbage heaps of Mumbai suddenly turn into a surface shot of a Da
Vaz drawing. What seems to the observer to be waiting for its final
disposal suddenly turns out to be a well of structured tonality, a
wonderful piece of poetry drifting by in a smell. It is as if the excess
of waste is providing the necessary gamut from which unforgettable
epics, songs and stories are created. All of a sudden no interior or
exterior exists any more. Before us matter dissolves and destructs
itself. A glance at Philomena's House reveals: the transformation of
matter cannot be arrested. Phenomenological truth is fugitive. It comes
and fades away, constantly emerging in different shape and form. The
transitions are blurred, the contours indistinct. Viewed in conceptual
terms, this is indeed a visually portray of fuzzy logic, which we can
call emotional logic. Precisely this induces the feeling of
weightlessness, of motionlessness, about which Da Vaz says: My feelings
are in the highest state of velocity when they are without emotion, like
the sail in the wind.