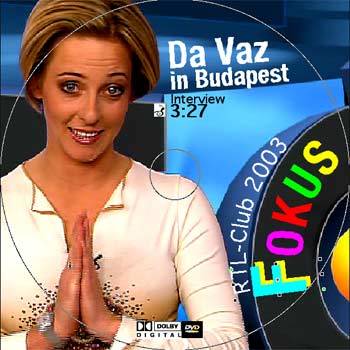 Jürg Da Vaz, a Swiss artist, a painter and filmmaker

Fókusz – RTL Club
Interview by Emese Acs
Edited by Róbert Kurucs
Filmed on site at the Zoo and in Hajos utca, Budapest

Jürg Da Vaz 00:01:02 Anikó: Jürg Da Vaz, a Swiss artist, a painter and filmmaker, arrived at Budapest, and we could spend a day with him. Don’t turn off, please stay with us! I know these kind of subjects don’t thrill you, but this time it’ll be different I promise. Because Da Vaz is not like a normal, boring artist. For example there are the pigs… 01:23 Narrátor: Jürg Da Vaz is waking up in his home in Budapest. His morning shower is different from the traditional one. Today he takes a shower with his Pyjamas on. Don’t ask why, maybe he is still in his dreamworld? Narrátor: After his unique morning toilet he shows us his ever so special bedroom. He sleeps under a huge portrait of his wife above his bed, this way he’s never alone, not even late at night. 01:48 Da Vaz: She’s my lover, my girlfriend, my companion, I like to have her with me, but if she gets too much on my back, I roll her up for a break. 01:56 Narrátor: Jürg Da Vaz was born 1946 in Switzerland. He paints and draws since the age of 19 when he dropped out of school. Since 1996 he started to make films and he began to let himself be filmed while drawing among animals. He didn’t think much about acceptance and public approuval. His interest was adventure and discovery. He made several motion pictures featuring chickens and pigs interacting with him. 02:34 Da Vaz: The people generally think my films as well as my paintings are strange, wild and buffling. Many of them like it, they are intrigued but they wouldn’t hang it in their bedroom. 02:47 Narrátor: Jürg Da Vaz chose a brand new place for his creation in the Hungarian capital Budapest. Because he couldn’t find any chicken or pig farm within the City limits, he decided to visit the Zoo. 03:00 Narrátor: Although this time there were no chickens and pigs around that related to him he quickly made friends with the goats, the donkey and the gnu. Da Vaz could feel their curiosity and their way of being part of the creative process quite soon. They really began eating away at his drawings! 03:10 Pasi: Well, his approach is novel. Da Vaz isn’t a fool, but he certainly is a provocation and people are puzzled. 03:17 Da Vaz: You know I’m very intrigued by the animals. Their instinct is so refreshing to my own senses. Their instinct is very close to my creative attitude. First is curiosity. To be among animals makes me feel free like swimming in the pool of heaven. 03:24 Narrátor: When we thought that the Pyjamas-shower and the drawing show „among-the-animals” were Jürg’s last surprises, we were wrong. The inventive artist took his roller strolling straight into one of the finest restaurants of Budapest. 03:38 F. József: Da Vaz is a very interesting, mind widening, unpredictable but friendly person with a global approach… 03:45 Da Vaz: Yes, I think this little trip to the Zoo gave me a fresh shot of creative energy. I feel I got new impulses from the searching noses of the animals. I have – as we say in german – “dem Leben auf’s Maul geschaut“. 03:56 Narrátor: The pictures of Jürg Da Vaz – „some of them were made in pig and chicken farms, other ideas come from garbage dumps, from daily life situations or from traveling - are also great entertainment”, the artist told us. The push, the inspiration he gets from the animals has brought him a greater widening of his horizon, as well as exhibitions and success with it. The answer of the weird creator to our question: what profit it has brought for the animals was: „it is my understanding they are not only made to go into the soup! first of all they are not mechanical meat-machines for tasty barbecue. In my experience, they are distinct personalities because they show excitability and curiosity like humans. To me they are there to enlarge my mind and widen my horizon. Here in the Zoo, their first interest was to look for the unexpected…, something new… and eat my drawing but not my carrot!…. It reminds me so much of my own creative bite.” Then Da Vaz rolled away… Interview Emmese Acs - Juerg Da Vaz RTL KLUB Budapest, Hungary Zolcer TV production 2003
Login|Guestbook|Shop|Email|News|Links|Home
GPLv2 ywesee 2020