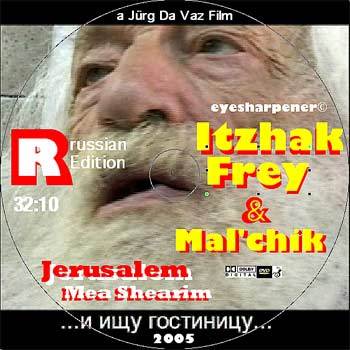 ITZHAK FREY & Mal'chik
Insight into the Soul of an Orthodox Jew
In 1873 orthodox Jews founded a new quarter not far away from the Old City of Jerusalem. Initially, 100 families lived there. They called the new neighborhood “Mea Shearim”, which means “One Hundred Gates”. The name comes from the biblical passage “Isaac sowed in that land and reaped in the same year a hundredfold” (Genesis 26:12).
Today, Mea Shearim is a unique and quite particular neighborhood in Jerusalem where strict interpretations of Jewish tradition and rule prevail. People dress as was common in Jewish ghettos of 18th and 19th century Europe. The men wear long black coats and round, fur-covered shtreimels (hats).
Usually orthodox Jews are suspicious and don’t like to be interviewed. Swiss filmmaker Jürg Da Vaz succeeded, however, to get close to them. In his amazing film “Itzhak Frey&Son” he reveals the mind of Itzhak Frey, an old wise Jew with Central European roots and deep Jewish convictions who sells pastries while giving Da Vaz some history lessons and - as a cashier counting the coins - is teaching Da Vaz religious philosophy. His colourful movie, which also has touching encounters with Frey’s son David, is a revealing document of orthodoxy in the 21st century.

One Hundred Gates and a Pastery Shop
The film is about the resistant character of life itself - refusing to be realized and recognized as it should be. Eyesharpener Da Vaz, with his patient hanging on, gets a process started. In his own words:
„As we left the bookshop in Mea Shearim where I had met David, he made sure: “Is the tape on?“ Walking through the narrow, busy lanes of Me’a She’arim and listening intently to his fascinating stories, I cautiously asked David: “May we visit your father?“ He first hesitated since he did not know how his father would react to my camera. His father had never allowed anybody to take a picture of him. Then David suddenly stopped, turned to the right and took me to the almost 90 year old Itzhak Frey who was working in his own Pastry Shop at Yecheskei Street as a cashier.“
Pierre Heumann
Login|Guestbook|Shop|Email|News|Links|Home
GPLv2 ywesee 2021