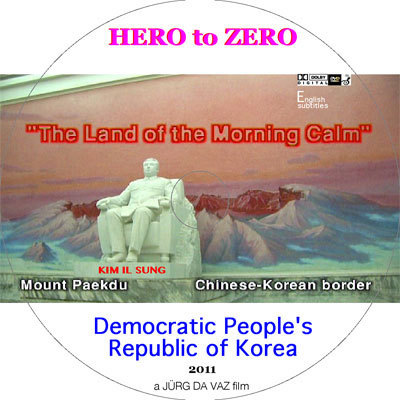 DPRK, surreal – so real!
The NO!...NO'S! of our two guides are an everyday occurrence. I don't work with hidden movie or photo cameras, my shooting activity is open but my focus I keep obscured by not looking through the finder shooting from the hip.

Since the guides don't allow us to stop on the highway or in cities without prior permission from the central travel office in Pyongyang, I take photos or movie from all types of angles. My "luck" is that roads and highways are often in poor condition and we roll by comfortably at 40-60 km, perfect to take snapshots.

It pays off to walk behind a Chinese. This invaluable lesson I learned in DPRK. Chinese in groups are a friendly bunch, they laugh, are loud, say hello and often ask to make a photo with you. They care less about restrictions, take pictures we are told not to make and walk around more freely. Moving behind a Chinese or a Chinese group of travelers is like moving your boat behind an icebreaker in the Arctic Zone. Chinese seem to be "naturally" hearing impaired, easy-going and not responsive to every whim of their guides.

As it always happened day after day, our two "permanent" guides discussed every move of us over lunch and dinner and reported daily to the main travel office in Pyongyang to get instruction. After arrival in Pyongyang one evening, they must have discussed my filming from Wonsan to the Capital with their superior because next day all shooting even from the car window was forbidden... .

For the Chinese leadership governments, dictatorships come and go. Their goal is to penetrate systems and political structures by means of production, exert influence and strengthen ties at all levels through market domination.

North Korea will become a satellite of China. This is not what the KIM'S want. But there is no alternative to the regime's survival of the KIM dynasty The Chinese want to make sure that their North Korean lips will have Chinese make-up on. China, it seems, pays great attention that North Korean and Chinese economies will be close-knit. Beauty products are a forerunner of this strategy, the lipstick a symbol of it.

The end will come but in endless and invisible small steps, unnoticeable. The Kim regime will come under Chinese patronage. China will help but at a price. North Korea is in China's orbit. China is already now buttering up the North Korean consumer -- not South Korea and the West. They kept the KIM JONG IL regime afloat and secured KIM JONG UN's succession.

My impression is that the Chinese don't want to topple the KIM dynasty and dictatorship for cynical and pragmatic reasons. They may fear that, without the Kim's ruthless grip on power, it could provoke a serious revolt and North Korea could rush inadvertently towards reunification with South Korea. A reunited Korea under Seoul leadership and allied to the US, highly developed, democratic and western oriented, would make the "Chinese Teeth feel very cold" indeed.
Read more about this work of art and leave a comment at Godzilla's Blog!
Login|Guestbook|Shop|Email|News|Links|Home
GPLv2 ywesee 2022