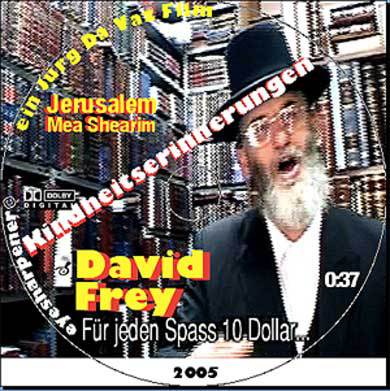 David Frey / Kinderheitserinnerungen – Mea Shearim
„As we left the bookshop in Me'a She'arim where I had met David, he made sure: "Is the tape on? I want it on BBC." Walking through the narrow, busy lanes of Me'a She'arim and listening intently to his fascinating stories, I cautiously asked David: "May we visit your father?" He first hesitated since he did not know how his father would react to me and my camera. His father had never allowed anybody to take pictures of him. Then David suddenly slowed down and stopped, we had reached his father's pastry shop. A few steps from the entrance he said:"go slowly." Then he turned around and left me. After about 40 minutes he returned and watched from outside how things were going. David had enormous respect of his father.
Login|Guestbook|Shop|Email|News|Links|Home
GPLv2 ywesee 2021