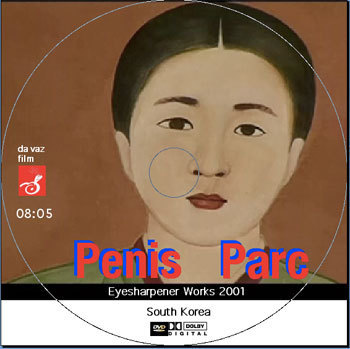 PENIS PARC – "Will the fish return?"
Haeshindang "Penis Park", located at the eastern coast of South Korea forty minutes south of Samcheok city, is proof of a sphere of freedom unheard of and impossible to imagine in North Korea. People arrive by the busloads every day to Penis Park, to hear the story of a young virgin taken by her fisherman lover to a nearby rock so she could collect better and more seaweed there. He promised to pick her up on his way home. As the weather turned bad, she was washed away in view of her fiancé, who saw her drowning in the stormy sea. The next day the fish caught were few and the following days there were none. In despair a local fisherman relieved himself into the sea and the fish returned. The townspeople took note of the fishermen’s plight and erected lots of penises to appease the tragedy of "the virgin on the rock" who could never bear a child.

Strolling through Penis Park between dozens of penises of all sizes big and small made of bronze, carved in wood and cut in stone I remembered two days earlier walking the grounds of Panmounyong at the 38th parallel with our North Korean army officer who was assigned to us, asking him when he would get married. "After reunification, maybe next year." When I dug deeper where he wanted to go for his honeymoon he did not hesitate:"To the famous Cheju island off the coast of South Korea." In his mind the North Korean way of reunification was just waiting to happen since the South was degenerating and the US imploding soon anyway.

Here in Penis Parc south of Samcheok city my eyes wandering from penis to penis in the company of some elderly South Korean female tourists the story of "the virgin on the rock" took a new twist when confronted with the horrors of the fracticide between the two Korea's. This war that neither side won – both remain officially at war because a formal peace treaty was never signed – had been fought in the shadows of World War II that preceded it.

One tends to overlook how the war got started. Kim Il Sung had pressed Stalin several times to attack South Korea with a preemptive strike. "Just the thought about reunification makes it impossible for me to sleep at night," Kim Il Sung confided to the Soviet Ambassador in early 1950. Stalin turned down the idea many times, because the United States had the atomic bomb – and used it 1945 at the final stages of  World War II in Hiroshima with up to 160'000 dead and in Nagasaki with about 60'000-80'000 casualties.

But by January 1950, the situation inside and outside the Soviet Union had dramatically changed. The Soviet Union had successfully developed nuclear weapons and Mao's communists had taken power in China. This opened a new page in the book of Soviet realpolitik and everything seemed to go Kim Il Sung's way. Now Stalin suddenly approved yet another war proposal by Kim Il Sung and Russian military officers drafted the invasion plans for him. Even before the war the skirmishes cost already 100'000 lives.

When the Korean War finally broke out on June 25 1950, the army of South Korea had 100'000 men under arms and suffered tremendous losses of 78'000 men in three days by Kim Il Sung’s army. Yet the South made heroic efforts to hold Kim’s forces back. When things turned bad for Kim Il Sung in October 1950, devious Stalin encouraged the Chinese to get involved in the war. The South on the other hand successfully integrated America's army and UN troops of 19 countries and by 1953 it counted one million men. This war which was started by Kim Il Sung with the approval of Stalin dragged America, the Soviet Union and Mao's China into their first direct "hot" confrontation.

In 1950 income was 160 US per head in North Korea, twice that of the South despite enormous American aid. Even in the 1980's student dissidents at the university in Seoul staged demonstrations. They envied the North's political autonomy - the result of Kim Il Sung's balancing act between the Soviet Union and China - and were against the UN-backed elections and America’s patronage.

In 1989 yet another unforeseen turn of events took place. The collapse oft he Soviet Union brought Soviet involvement and investment in North Korea to an abrupt end. Industrial activity in North Korea came to a standstill. China was back in the picture and moved into the political void. In 1990 famine broke out in DPRK, the Democratic Peoples Republic of Korea and millions of people died. Who was able to flee crossed the border into Jilin and Liaoning provinces in northeastern China.

North Korea has not recovered from the collapse of its mentor, the Soviet Union. North Korea with Kim Jong Il, the son of "The Eternal President" Kim Il Sung, has put all its resources in shady business deals, the development of atomic power, rocket technology, ballistic missiles and arms production. North Korea is the most militarized country. During the same period South Korea has chosen the capitalist path and is basking in unprecedented economic success and a growing middle class. The economic gap between the DPRK, the Democratic Peoples Republic of Korea, and South Korea and its people is widening by the day.

Though both countries are armed to their teeth, they talk of peace and reunification. But no side is willing to cede power or share wealth and make a move towards reunification. Any hope is drowned in the stormy waters of world politics and the ever growing gap of the two political systems of North and South Korea.

Will the two brotherly countries one day "relieve their power into the sea" like the fisherman did? But who will act as the "Link-Virgin on the rock" and induce the two states with different political systems to live side by side in peace? Who can do it for them? "Will the fish return" one day and bring  economic dynamic to the whole peninsula?

As I see it, the only power that could give a helping hand to North and South Korea is the People's Republic of China. But hélas, so far China is not willing to serve as a "Link-Virgin on the rock" between the two. As our driver in Beijing said when asked about Beijing's ambition with North Korea: "Without lips the Chinese teeth feel cold." But who knows, time will tell... .Till that day the Penis Park south of Samcheok city may serve as a reminder "that the fish will return".
Login|Guestbook|Shop|Email|News|Links|Home
GPLv2 ywesee 2022