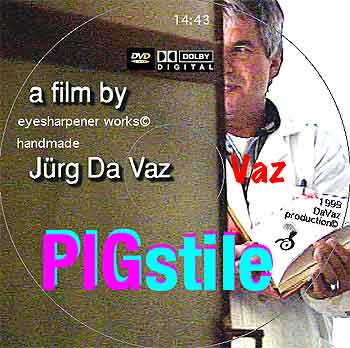 PigStile
In this film, complex scenario presents the director’s interaction, using pad and pens, with a variety of pigs at the Hungapig farm in Hungary. From baby pigs still attached to their mothers’ umbilical cord to mature adult ones, the artist’s pad again becomes the medium for human-animal interaction. This time it is less a question of the artist becoming pig-like, although this clearly also takes place, than of the pigs becoming artists or rather finding a new means of expression. As the film progresses, the director’s actions become for the pigs less the sign of a potential food source than an opportunity for playful and creative response in accordance with the director’s motto: ‘Creativity is not optional.’

A document of biological code. New directions for creativity. The hilarious passages with their cloacal
double and triple entendre reinforce the feeling that to be creative is not optional. Filmed on site at
Hungapig, Herceghalom, Hungary.