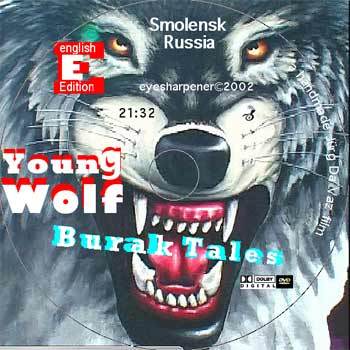 
YOUNG WOLF
Picking me up at Sheremetievo Airport Yura had plans to visit his family in Smolensk. They had a family reunion. As we drove from Moscow to Yuri's hometown he told me the family was unaware that we would join them.
There were heartfelt moments when we entered the circle of family members at Tamara's flat.
Somehow I only get these touching moments in Russia. I ask myself : Do they have different hearts or is it the vodka?
Maybe it is the vastness of space of this enormous landmass that does this to the human soul.
- I call Russia an Ocean, it is not a country to me.

As we sat down at the table, I felt somebody was missing,
I asked Yurika. Yes he said, his parents had divorced long time ago. Yevgenyi, his father would not show up anymore. Nothing and nobody could make him move to come by.
I listened. then I said: Let's call him!
In the living room I had found some old photos in a cardboard box under the shelf. As it turned out his, father was a photographer at a Smolensk Newspaper for 30 years.
After the collapse of the Soviet Union he was retired. He lived of his pension of 30 Dollars a recluse life, fishing to make ends meet and to pass his time. He had given up Photography.
They told me he wouldn't come but when grandmother had left he showed up.
I kept my camera rolling. To my big surprise Yevgenyi started to speak German!
I was unprepared.
But somehow I had been waiting for him not knowing why.

Dedicated to great grandfather Yevgeni Burak, station manager of USSR-Rail in Minsk.
He had 8 children. He was arrested and sent to the Archipel Gulag where he died 1932.
Yevgeni Burak was rehabilitated when Chrutschow came to power 1956.

filmed on site in Moscow and Smolensk, February 2002