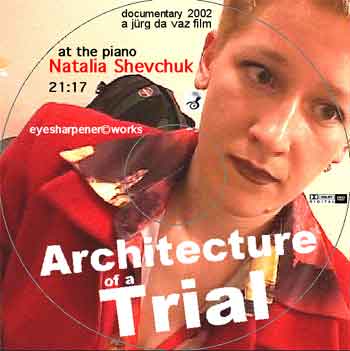 ARCHITECTURE of a TRIAL
Architecture of a Trial is about a young lady who plays the piano for the last 20 years.
She just past all her exams with bravura. But she suffers in her head terribly.
She measures herself with the sun. Her heart gets burnt. Her courage falters.
She invites me to listen to her piano at the Conservatory in Alma Aty.
As she starts playing she says:"Piano is the biggest failure of my life."
I decide to look for myself. I listen carefully..
Is it when Error turns into Failure that a trial turns into Trial?
There are some errors, never mind but her attitude does not accept error.
She is on Trial instead. It is her attitude which makes her feel she is a failure,
it is NOT her playing.
I could detect no failure but a trail instead.

filmed on site at the Consevatory in Alma Aty. Kazakhstan

Through http://www.youtube.com/user/juergdavaz/videos?view=0&flow=grid&live_view=500&sort=dd, you can access one of Swiss artist Da Vaz’s videos on Kazakhstan. This, well, unorthodox artist has been travelling through Kazakhstan and produced a 1.5-hour documentary without ‘annoying’ commentary.

It contains very interesting perspectives from throughout the country
– some bleak, some rather funny – and is recommended viewing for all
those who have a boring assignment to do and can afford to have a Google
Video window open on the edge of the screen. The choice of music
throughout the film ranges from traditional Kazakh music via Abba (!) to
full-blown club tunes (some of which is rather misfortunate).

Of note are the shots from the dry Aral Sea bed, the Russian exodus
and the impressions from Astana at the end of the film. Da Vaz allocated
a lot of his film time driving around in a car, in my opinion catching
the endless width of the Kazakh steppe quite well. However, by spending
such long time along the main roads, the images are also quite
misrepresentative as their overall feel is rather desolate and
Kazakhstan certainly has many very beautiful spots as well. And while
loads of cars break down on Kazakh roads, Da Vaz must have an obsession
with burst tyres and other misfortunes on Central Asian roads.

If you wonder how Da Vaz works, check out this TV-feature
on his stint at a Kazakh media school. His filming techniques are
certainly quite unique, not only for the Kazakh students. Maybe because,
in Da Vaz’s words:

He refused to go to any Art college. He disliked the idea
of learning the basic techniques. The outcome? A movement called, “Da
Vaz”.

For Da Vaz, it’s not a question of techniques but how one evolves that
along with the creative process. When you go through his work, he urges
you not to search for his intentions behind them. It’s how you perceive
them that’s important.

I love Kazakhstan, my heart speaks Kazakh, I feel at home in every
corner of this endless ocean and above all I love the kazakh people.