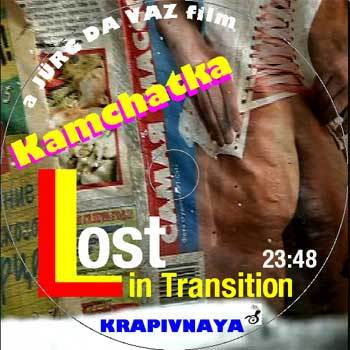 
LOST in TRANSITION
27.7.2005
Having arrived in Esso I told Sergey our driver to take us into the woods the next day. No arrangements were made and no people contacted to keep the trip as unprepared as possible. It was rainy season with mosquitoes in abundance as we made our way about 200km off roads through the deep forest of Kamchatka. The traveling eye soon enough caught on to some place that looked like "Waiting for Godot" in the middle of nowhere.
As I found out later, the problem was not that Godot never showed up, the opposite had happened: officials from Kozeretsk had come to wipe the village Krapivnaya of the map, erase its official records, registered the four houses of old Krapivnaya together with all the 15 people as House Nr.1.
But the Bureaucrats of Kozeretsk didn't leave it at that. They also took away Yuri's ID card, property papers and his permit as a forester on the pretext that his garden was some feet to big. It was evident what they were looking for: to extort money from him.
"Place of Nettles", the village of Krapivnaya was called, "Absence of Paradise" so to speak.
I did the first shots in the kitchen house of Galina,Yuri and Babushka Daria to the tunes of the Rolling Stones from the local radio station. Yuri the owner could have easily put an end to my endeavor. But on the contrary: he put hay in the doghouse to make his dog feel comfortable, because Yuri had a message. It was as if he had been waiting for this to happen. He took us deep inside his private world he had made for himself.
Without government support or subsidies of any kind, without interest free loans or other perks or benefits he was self-sufficient. A sample of ingenuity and skill, 10'000km from Moscow in the deep forest of Kamchatka, at the other end of Russia. Nothing would make him swap his pleasures of planting vegetables and baking his own bread for something better in the City as Galina his second wife would have liked. He had found true happiness in the place of nettles. Did it come from his knowledge, in particular from how he organized his life and his unshakable belief in harmony that he was able to survive in this hostile setting and create a lifestyle which was very much his own?
Yuri was mapping his paradise on one of the many arms of the River Krapivnaya in the middle of nettles, a totally unspectacular place, not accessible to the outside, but something of great value was alive inside this world of long and boring winters as well as during the rainy weeks and in the company of myriads of mosquitoes in summertime: authentic history in a forlorn corner of no-mans-land in mother Russia's womb.
Juerg Da Vaz
Login|Guestbook|Shop|Email|News|Links|Home
GPLv2 ywesee 2022