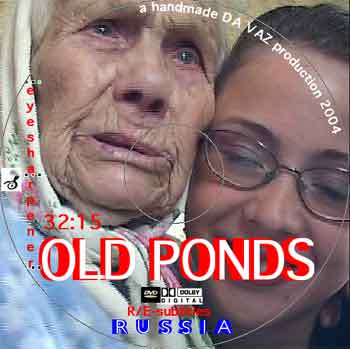 Sitting in her flat in Old Ponds, a two hour drive outside of Moscow, Tatyana Osipovna Martynova picked up her glasses from the table and said: With my glasses on I can not see anything but without glasses I can read everything up to now – if I would have learned reading. Tatyana has never gone to school.

Nine months later, after having cut the material in Moscow and Budapest I returned  in March 2004 to show her "OLD PONDS". While watching the film she said: I can not see anything! But when she talked about it afterwards she remembered sequences as short as four seconds. Having watched the film she said: Now I can say goo-by. Tatyana Osipovna Martynova, born 1903. She died in her apartment on 16 June 2004 in Old Ponds, Russia. She was 101 years old.

EMAIL
21 April 2007
Good evening. My name is João Belmiro Freitas, I live in Criciúma, Santa Catarina - Brazil. I had chance to attend the excellent set of documents "Old Ponds" and found the music of deep fascinating of the documentary related one. Already I tried to search for the Internet some times and I do not obtain to discover the name and the author of this gorgeous music. Would it be possible to answer this email saying which is the name and the author of the music subject of this set of documents? Being thankful and congratulating vocês for the excellent work.
Greetings
Belmiro, Criciúma, Santa Catarina - Brazil

EMAIL
23 April 2007
Hi Belmiro, Many thanks for your comments. The title of the Album is Spiritual Healing II. Right now I have no further information but if I get to it I will let you know. How did you get to my film OLD PONDS?
Best wishes
Jürg Da Vaz 24 April 2007

EMAIL
Good evening Jurg, The first time that I entered google to search for video that was pertinent the area where i work (I am engineer electrician) the video old Lagoons was in the page of entrances of google video and open the video to attend. I confess to you that I was touched some times throughout the film. Your had been happy and sensible when telling the gorgeous story (of Tatyana) with this spiritual music "healing II". Since I could not find out the name of the music in the Internet I searched in google "Jurg Of the Vaz" and obtained the e-mail for contact. I confess to you that it found very unlikely that I would get return in the e-mail that I sent to you, and that I was very happy when receiving your reply. Exactly of very far (Criciúma - Brazil) I go to try to follow your works and to ask for the God who you have much success in all your projects. One more time thanks you.
Belmiro
Login|Guestbook|Shop|Email|News|Links|Home
GPLv2 ywesee 2022